This is the story of what every day people can do when they work together to help save lives and rebuild a country.

On January 13, 2010, DC3 Global and The Wheelchair Foundation (partnered with MedShare) launched an ambitious mission to send a private plane full of medical supplies and doctors to Haiti. Over the following weeks, dozens of everyday people pulled together to accomplish and extraodinary mission that saved lives and brought hope for hundreds of Haitians in the aftermath of one of the worst natural disasters of the century.

RICHMOND, CA (KGO) — People all over the Bay Area are doing what they can to help the victims of the earthquake in Haiti. Despite the recession, donations are still pouring in from adults and young people as well.

The Wheelchair Foundation of Danville went beyond its original mission to provide 2,000 wheelchairs for the victims of the Haiti earthquake. It flew in eight tons of medical supplies along with 50 doctors and nurses who gave badly needed surgery to people dying from blood infections caused by blunt trauma.

“We had a couple stay. They didn’t want to come back. You just get so wrapped up and so involved in helping these people and you get so much out of it, you kind of forget about time,” said Jeff Behring with The Wheelchair Foundation.

The foundation is gearing up to deliver another round of supplies and medical aid. The images that Behring witnessed are compelling other groups to go beyond their own means to help.In Richmond, a city that often finds itself in need, people are coming out to give what they can.

“A lot of the kids out here are going through some hard times,” said student organizer Gina Saechao.

Saechao says their own pain is helping fuel the effort to put on this six-day tournament and raise $50,000 for the Red Cross.

“Just because we’re disadvantaged it doesn’t mean that we don’t care,” she said.

FRESNO, Calif. (KFSN) — A medical team from Selma just flew home from Port-au-Prince after volunteering there for the last week. This team is made up of three nurses, one doctor and a former army medic.

They’ve all seen gun shots, stabbings and assaults before but nothing prepared them for what they encountered once they got to their destination.

Inside Dr. Joaquin Arambula’s iPhone are 5 days worth of photos chronicling the mass destruction in Haiti and the affects on its inhabitants. “It’s going to take more than two days, two weeks, two years to fix the structures and issues that they are going to have,” he said.

Sunday afternoon Dr. Arambula and fellow nurses Jennifer Tarazon, Tamara Bryan and Tim Miller met in Northwest Fresno to wind down and reflect on what they saw in Port-au-Prince.

“We had a floor of 75 kids that were either amputations, waiting for amputations, dehydration and they actually had a death from tetanus,” said Tarazon.

Bryan added: “Things are in boxes laying around and the supplies you have to work with are far and few. You have to just rig things together and make your own equipment.”

“There’s no way this country will be anywhere near [where] it was, which it is still behind, in 30 years,” said Thomas Miller a former Army medic.

Miller said there was too much red tape keeping them from doing their jobs effectively. “I think there needs to be a non-government group that in some way creates a liaison that can somehow filter the right people to the right places,” he said.

The few times they were able to venture out they were under constant military guard.

“God bless our troops, those guys. Talk about the professionalism. Everything was amazing. We couldn’t have gone anywhere without them,” said Miller.

This group, which managed to survive off of 8 hours of sleep, said the memories of the children they met will stay with them forever.

“You’re taking care of a child and she’s trying to hug you and she only has one arm and you want to cry but she’s smiling and she’s laughing and she’s just thankful that you’re there,” said Tarazon:

“They need help. They need a lot of help. I would go back in a heart beat. Without even thinking twice about it,” said Bryan.

This group was able to donate 50 wheelchairs to people in need through the Wheelchair Foundation. They want to go back but they have to raise the money first… they say it costs thousands of dollars to ship supplies and themselves into the disaster area.

At 8:30 this morning an MD-87 filled with over three tons of emergency medical supplies and wheelchairs departed Stockton for a humanitarian aid trip to Haiti.  There were also 8 doctors and trauma nurses, a documentary film crew and Wheelchair Foundation (a Division of Global Health & Education Foundation) representatives on board.  This is a story of many different groups collaborating together in a short period of time to provide important relief to a country in crisis.  We will be periodically providing updates of the trip’s progress and experiences. 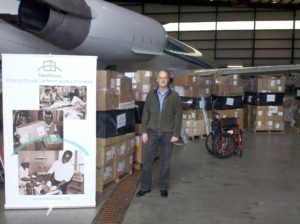 Shortly after the catastrophic 7.0 earthquake devastated Haiti on January 12, 2010, Dan Catullo III, the founder of DC3 Music Group (www.dc3global.com), contacted the Wheelchair Foundation to see if its founder, Ken Behring, would be interested in loaning his private jet to send physicians and medical supplies to that country.  He agreed to lend his plane and crew if sponsors could be found for the fuel.  Catullo immediately began contacting his associates in the music industry.  Scott Stapp, the lead singer for Creed, and New Kids on the Block stepped forward with substantial donations and encouraged other bands to spread the word on their websites.

Catullo then called Chuck Haupt at Medshare (www.medshare.com), to see if they would donate emergency medical supplies.  Haupt responded immediately with 8 pallets of materials like sutures, gauze, syringes, surgical gloves, etc., which are so desperately needed in Haiti.  They have been loaded into the cargo section of the plane along with 30 wheelchairs donated by the Wheelchair Foundation.  Medshare has also generously agreed to transport another 7 pallets of medical supplies from Atlanta to Fort Lauderdale for the second flight to Haiti.  These supplies will be given to Partners in Health (www.pih.org) at the Port-au-Prince General Hospital.

John Muir Hospital in northern California also played a major role in supplying antibiotics and other requested supplies.  Jeff Behring, the son of Ken Behring, and Glenn Perry, a longtime supporter of the Wheelchair Foundation, had met Senator Bill Frist at an event the previous week.  Frist, a surgeon, had just returned from a week in Haiti and told Jeff what supplies were the most important.  When Perry contacted Ben Drew at John Muir, the hospital provided everything on Frist’s list.

You also need a “slot time” to land in Haiti.  Phil VanderWilt, the MD-87 pilot, was on the phone most of a  day trying to secure a position.  He finally got one that was six days away.  The plane will land in Fort Lauderdale Wednesday night, pick up more doctors, and head to Haiti.  The jet will then be unloaded, extract doctors and specialists from Partners in Health and Direct Relief International that have already been on the ground for a week or so and return to Florida.  Two days later it will transport another 16 doctors and two tons of medical supplies to assist in the relief effort.  The plane will then depart for California.

The Wheelchair Foundation would like to commend Jeff Behring, Dan Cathullo and Chris Rudd for their tireless efforts and passion in making this project come to fruition.  We also want to thank the musical performers and their fans for their invaluable support.  The people of Haiti need your help now and into the future to rebuild their lives and their country.

The Wheelchair Foundation is a Division of Global Health & Education Foundation.

We may request cookies to be set on your device. We use cookies to let us know when you visit our websites, how you interact with us, to enrich your user experience, and to customize your relationship with our website.

Click on the different category headings to find out more. You can also change some of your preferences. Note that blocking some types of cookies may impact your experience on our websites and the services we are able to offer.

These cookies are strictly necessary to provide you with services available through our website and to use some of its features.

Because these cookies are strictly necessary to deliver the website, refuseing them will have impact how our site functions. You always can block or delete cookies by changing your browser settings and force blocking all cookies on this website. But this will always prompt you to accept/refuse cookies when revisiting our site.

We fully respect if you want to refuse cookies but to avoid asking you again and again kindly allow us to store a cookie for that. You are free to opt out any time or opt in for other cookies to get a better experience. If you refuse cookies we will remove all set cookies in our domain.

We provide you with a list of stored cookies on your computer in our domain so you can check what we stored. Due to security reasons we are not able to show or modify cookies from other domains. You can check these in your browser security settings.

These cookies collect information that is used either in aggregate form to help us understand how our website is being used or how effective our marketing campaigns are, or to help us customize our website and application for you in order to enhance your experience.

If you do not want that we track your visit to our site you can disable tracking in your browser here:

We also use different external services like Google Webfonts, Google Maps, and external Video providers. Since these providers may collect personal data like your IP address we allow you to block them here. Please be aware that this might heavily reduce the functionality and appearance of our site. Changes will take effect once you reload the page.

The following cookies are also needed - You can choose if you want to allow them: