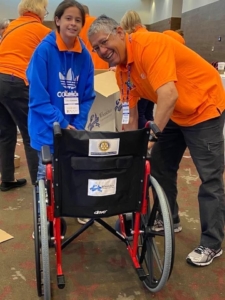 In the last week of February, earlier this year, we returned to Monterrey, Mexico, for a wheelchair distribution and other “hands-on” community service.  On Friday, we painted a Senior Center for Alzheimer’s patients (“celery white” was the color they chose), planted five trees, and presented three people with wheelchairs. One of them was a polio survivor, which made the day even more powerful.  Because of the efforts of Rotary, and the Gates Foundation, we don’t really see any young people with polio anymore, and most people today don’t realize how devastating disease this was a half-century ago.

Along with about 20 other Rotarians from Northern California, we interacted with Rotarians from many of the Monterrey area’s 18 Rotary Clubs.  Their hospitality is legendary and it was so fun to look at their projects and enjoy Members Night Out dinners (including a restaurant known for its goat or “Cabrito” dishes) as we continue the “Amigos Para Siempre”, “Friends Forever” philosophy we adopted 17-years-ago with the Monterrey Rotarians.  It has been so rewarding for us to partner on so many projects.

Want to join the discussion?
Feel free to contribute!

This site uses Akismet to reduce spam. Learn how your comment data is processed.

A Message From David Behring